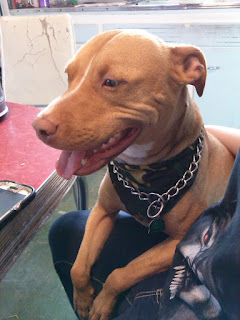 Yes, we have a red-nosed Pit Bull:)  This is Dexter, and he's about as vicious as a limp noodle.  Unless he doesn't know you; then he's likely to growl, bark, and ready to defend his pack....but once he sees you're friendly, he will try to crawl into your lap.  He thinks he's a 50 lb lap dog!

We acquired Dex when his former owner could no longer keep him, and asked if he could stay with us 'only for the weekend'.  Four years later, he's part of the family! 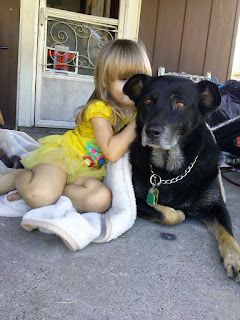 This is Cheyenne, our 'German-Rott-Bull-Chow' mix.  Daughter Sara adopted her from the local shelter back in 2010.  This is the best picture I could find of Chey, who is now 8 years old. 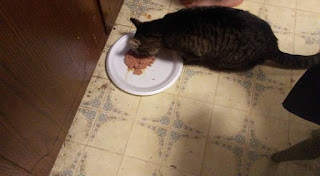 Next up is Jelly aka Jealous aka Jelly Bean aka Jellico aka Jellyboo.  We were originally supposed to get two cats, and since Sadie was found first, Miss Jelly earned her name by trying to attract the daughter's attention.  But when it came time to collect both cats after we moved, Miss Sadie was nowhere to be found.  Jelly discovered she enjoys a can of Fancy Feast every morning, and is leery of the granddaughter.  Her litterbox is downstairs, but the only time she really uses it is in bad weather, since she spends the majority of her time in the back yard.

Now For The Pets We've Lost in Recent Years: 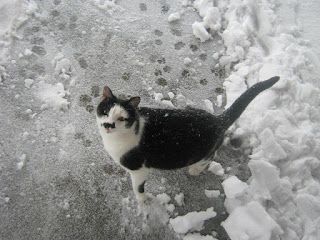 Our beloved Oreo....my youngest rescued him from a park back in 2009, and disappeared one snowy February day.  It happened to coincide with a neighbor's 'Stray Cat Round Up' action plan, and since Oreo was never one to pass up free food, we think he was taken to the country and dumped along with the others.  My youngest son grieved for months over the loss of his kitty, and though people thought they've spotted him, we either couldn't find him, or it turned out it wasn't him.  I thought I saw him at the Humane Society, but someone had already adopted him.  If it was him, I hope he's found a good home. 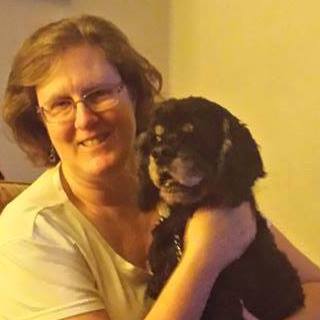 My sweet Roxie.....she was rescued back in 2009, and the first Cocker Spaniel we've ever owned.  Her former owners left her to fend for herself in the back yard and neglected her.  It took us months to get her to understand she would always have food and water, and she lived to the ripe old age of twelve.  She slipped off her chain once and I thought I was going to find her in the middle of the street, but this blind sweetheart managed to find the Doggie Boarding Shelter five blocks away.  Another time we thought we'd lost her, someone found her and placed her in an outside pen of the animal shelter.  Poor Roxie, who also suffered from arthritis, was outside the entire night in 50 degree weather.  We brought her home and warmed her up, but when she later had trouble with her bladder, it was time to let her go.  Dexter and Chey howled as we buried her, and lay on her grave for about an hour. 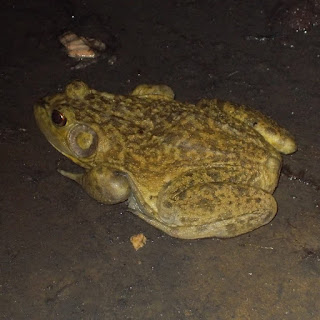 Last but not least, is our deceased 'Kermit'.  We're not sure how this bullfrog found his way into our basement, but he was an extremely helpful pet, eating the camel crickets and whatever else he could find.  He played tug-of-war with my towel at times (our shower was in the basement) and would sometimes spend his days in the shower area.  When we moved, we scooped him up and wrapped him in towels in a bucket to hibernate, but someone put the lid on slightly too tight, and we think he either froze or starved to death.  Every spring his mating call would entertain us, and he has been missed.

I also use this picture as my FB profile pic when I begin to get too many requests from men, trolling for hook ups.  Usually after about a week, it stops:)

I couldn't find any pictures of our Norwegian Elkhound Shadow, our German Shepherd Keisha, or our Black Lab Lucky. Shad and Keisha passed away in 2007 (Shad of a heart attack and Keisha was put to sleep due to old age), and we had to put Lucky Pup down in 2010 due to bladder issues.  We'd had Shadow since 1996, and the other two since 2000.  Our other four cats were born in 1991, and passed away in 2004, 2005, and 2006, all of natural causes, though Gizmo disappeared into the woods in 1998 and was never seen again.

Want to meet other fur babies?  Click here.
Posted by Kenzie Michaels at 6:36 AM

Dexter's expression in that picture is almost regal, in a cat-like way.

Pits are great dogs that get a bad rap because of bad owners. Princess, our first Pit, was the best dog ever!

Love the pics and lol about Kermit and your towel! We had a big toad that lived outside years ago that the girls named, "Fatty McFatty". When a smaller one showed up on our deck a year later he was, "Little Phat" ;)

Thanks for sharing such wonderful memories and pictures, Kenzie!

Thanks for sharing the memories. And what a mix, including an elk hound.

Great memories, love the pictures and stories. Thanks for sharing!

@Ed and Meka: Dex is definitely a ham:) That first week he spent with us, I kept him downstairs, since I wasn't too sure of him. But now he likes to climb in my lap.

@Maureen: I NEVER thought I'd enjoy having a frog in the house, much less sharing my shower! He was fun to have around:)

@Raine, Helen, and Robin: Thanks for stopping by:) Glad you enjoyed seeing our four-legged members, past and present.