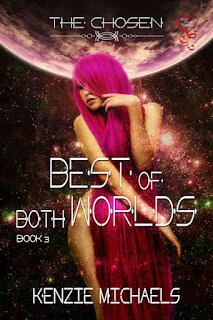 Book #3 of The Chosen, arriving next month:)

No stranger to controversy, SaLie SiLah is offered a position on the newly opened Tri-Xa space station. Expecting to further her relationship with the father of her child, SaLie learns she will be working closely with her childhood sweetheart. Will her eyes be opened to the fact love has been within her reach this entire time?
Dr. JeTil PaHej thought SaLie was his Chosen when they were seniors at the Academy, but he hadn’t counted on her infatuation with the Xaxonian commander of the new space station. When he learns SaLie will be joining him on the medical team, he forms an unlikely alliance with DuKah, in order to win his woman back. Will the ploy work, or will the deception turn her against both men?

Excerpt:
“Your quarters will be adjacent to the Infirmary, as is the rest of the medical staff. Right now, the only injuries have been minor, but Dr. PaHej is eager to assemble a full team—”
“Wait a minute.” SaLie felt the turbo lift descend. “Did you say Dr. PaHej? I thought I’d be working with Dr. TaRon.”
“You will. Dr. TaRon is the senior medical officer, but since you’re here as a Pharmacological Expert, you will report to Dr. PaHej, in order to assist with assembling the medicines.” A look of concern crossed OkVei’s face. “Weren’t you told?”
“It’s all right. As long as he stays out of my way and lets me do my work, I’m sure we’ll get along fine.” SaLie inwardly seethed. “I thought he retired last year. He drove me crazy my first year at the Academy.”
“Oh no, Aunt SaLie. Our Dr. PaHej is his nephew, JeTil PaHej.” The turbo lift stopped and the doors swished open.
JeTil PaHej? Oh dear gods…this was getting worse by the minute. SaLie followed OkVei down the corridor, then stopped him when they turned the corner. “I had no idea JeTil PaHej had entered the medical profession.” She closed her eyes and leaned against the wall. “In what capacity will I have to work with him?”
“I-I don’t know, Aunt SaLie.” OkVei’s voice held a note of alarm. “Do you know him?”
Did she know him? Images of JeTil filled her brain. The way his dark blue hair curled at his ears. The strain of his shirt against his muscles as they lifted weights. The look in his eyes the night he’d kissed her for the first time. The weight of his body close to hers—
SaLie cleared her throat and shook her head to get rid of the images seared into her brain. “You could say that. We were classmates at the Academy." 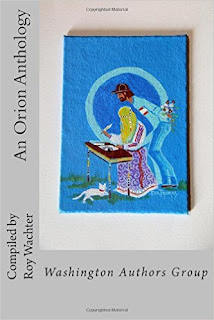 Yes, I've been busy this summer!  I submitted a short story to the Washington Authors Group (Washington, In) and it was accepted.  Titled 'Murder In Meeting Room Three', it is a YA murder-mystery.  Here's a short excerpt.

“Kim said your story on Google Docs wasn’t quite finished. Will you have it ready by next week?  She also said-”
“I said the plot looked a bit weak.  Maybe we should schedule you for the next one?”
Tara sat up straight and took a deep breath.  “I have it finished in longhand and will post it to the site tomorrow.  It says that at the bottom, Kim.”
Kim giggled.  “Oh, I thought that was what your character said.  My bad.”
Tara flinched.  Of all the slang terms lately, ‘my bad’ was the one she couldn’t stand.
“Meeting adjourned then.  See you all next week.  Tara, the purpose of putting our work on Google Docs is so everyone can read them in time for the meetings.  If you don’t have your work up, then how can we critique it?”
“I do my best work in study hall, and last week my computer lit teacher refused to let me copy my stuff on the site.  I just haven’t gotten around to it.  I promise I’ll have it up tonight.”
“See that you do.”  With a flounce, Rita started for the door.
All at once, an alarm sounded and the lights went out.  Tara, who had just stood up, felt for the chair and sat back down among the screams.  The girls called to each other, finding their ways back to the table or pulling out their cell phones to illuminate their way.
“Where’s Rita?”  Kim’s frantic voice rose in pitch.  “I can’t find her.”
“I can’t open the door,” came another voice.  “It must be tied into the alarm system.”
The lights flickered back on, and Tara stood up to stuff her notebook back into her backpack.
Kim screamed.  “Rita!”
Tara turned with the others.  Rita’s body lay prone in front of the door, blood seeping from her ear.