Hobbies: When Do I Find Time? #MFRWauthors

"Congratulations....according to the IRS, you now have a very nice hobby."
-H & R Block tax preparer 2013

Wait....what?  I just had my most profitable year as an author and you're telling me I can no longer file my Schedule C?  What the hell is wrong with you people?

My career has taken a few blows in the past two years, with one publisher folding in 2015 and the other following suit last year.  My year-long experiment to keep my numbers spiking on Amazon resulted in monthly checks, but only recouped 1/3 of the money I paid out in booth fees, and could not afford to put out another title under my name. But something good came of it.

Needlepoint/Embroidery
While poking around in our basement, I came across a box of my grandmother's things from 2012, among them being a small needlepoint kit.  I decided to try it, and fell in love with the craft.  When I found out my my niece loves butterflies, I found another kit at Hobby Lobby and spent three months working on it.  A friend graciously turned it into a pillow, and since it's going to cost me $60 to ship it to her, it will have to wait until next summer when she arrives for a visit. 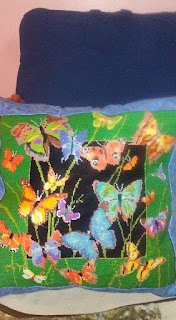 I've also found a leather journal and a bookmark that I'm going cross-stitch and to somehow incorporate into a giveaway this summer, to celebrate the release of my latest book (more on this later).

Binge-watching TV:
If you read my post a few weeks ago, or follow me on FB, then you're well acquainted with my TV habits and the fact I spent the past two months engrossed in Game of Thrones, and am now immersed in Downton Abbey. Since my spouse can't seem to get enough of Fox News, most of my shows on are on the DVR, and I watch them whenever I get a chance.

Reading:
I've been a voracious reader since the beginning of time, though since becoming published, the only time I seem to actually read anymore is either in the car or right before bedtime.  My granddaughter has developed a nasty habit of leaving Kindles around the house and not telling people when they need charged, so I've hidden mine from her, and pull it out at bedtime to play my daily Solitaire challenge.  I think I've got five books yet to be read on it, as well as a stack of paperbacks on the night stand.

Last count of my book collection stood at maybe 1500; that does not count the books on my kindle or the ones I've downloaded to floppy disc or online storage.  I hope Total-E-Bound never goes out of business, since any books I've bought from them are on floppy discs and I no longer have that drive.  Some I downloaded and saved on my Dropbox....but I really love the 'library' aspect to TEB, which archives your purchases and allows you to download them again (admittedly, it's been several years since I've been to the site, so I hope this still applies!)

Karaoke:
Six years ago this month, my BFF insisted I go out to karaoke with her.  It took me a while to work up the courage to sing a song on my own, and after I finished Invincible by Pat Benetar, the other six patrons politely clapped, then one of them came over and told me I had a good voice, and he was looking forward to more from me.  This boosted my confidence, and the next time she and I went, we decided to simply go through the song list, alphabetically, to find songs in our range, since she was tired of singing the same ones over and over, while I had no clue which ones were in my range.

I'm proud to say I've now reached the 'Love' titles and have a fairly solid list of songs on my 'good' list:)  Beloved songs from The Carpenters, however, are too low for me, and I've been able to bring out my inner rock star at times, wowing patrons with songs by Bon Jovi, Triumph, Journey, and even some Skid Row.

So What Does This Have To Do With Finding Time For Hobbies?
I'm so glad you asked:)  There are only 24 hours in a day, and at least 7 are spent sleeping.  2 hours in the morning for getting my youngest off to school, breakfast, and getting dressed.  Another hour for lunch, and generally 2 for dinner/clean up.

2-3 hours for binge-watching TV or DVDs.....twice a week I'm singing karaoke for 2-3 hours.  What am I down to?  6 hours....and I still have to run errands with the spouse, check social media, do housework, and did I mention we'd recently moved into a house?  So I'm also in the process of getting things arranged, though things have slowed down until the weather improves, and I can get into my storage unit.

Yeah....right now, I can spend at least an hour or two working, as Monday showed, since edits arrived.  So the hobbies have taken over, temporarily! 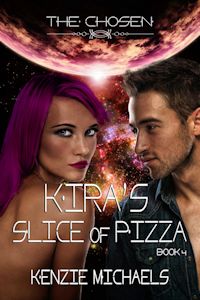 Here's the shiny new cover art!  I really hope that title makes readers go 'huh?' and to buy it out of curiosity:)  Intrigued?  Here's the blurb for #4 of The Chosen series:

Leaving TriJupe to escape scandal after the death of her Bond Mate, KiRah exiles herself on Earth and takes refuge in an abandoned house to paint and mourn her loss. But when a stranger brings upheaval to her new life, will KiRah discover it’s possible to love again?
Duffy Switzer never thought he'd be interested in an artist. Kira's quiet demeaner proves refreshing after a string of self-centered women, and having someone who makes no demands leads him to believe he's found the perfect woman. But as he's drawn deeper into Kira's life, he learns she is no ordinary human. When the truth is revealed, will he turn his back on her?

I'm hoping to release this book in time for my 1st signing, an author's fair in La Grange, KY, at the end of April.

Want to see what other hobbies authors enjoy?  Click here:)
Posted by Kenzie Michaels at 6:57 AM

I watch very few shows when they air now. Elementary being the only one. I like the idea of recording them then fast forwarding through the commercials. Sadly this year I have very few since I wasn't a fan of any of the new shows.

I still have a box of my grandmother's embroidery magazines and patterns. I may never do any more of them, but just knowing they are there provides a link to the past. May next year the IRS quote be "you have a nice business."

You are one busy lady!

Never thought of my binge watching as a hobby. Guess it is! Have fun at the signing!

Tv is how I turn off from writing my own stories. I have lots of series I binge watch ... Elementary, NCIS, and most recently Once Upon a Time. :)

@Meka: I love being able to fast-forward through the commercials! Now we have a Hopper, and some shows a screen will pop up, and give me the option of automatically skipping the darn things:) Not sure why that's not an option on ALL shows!

Hubby also enjoys Elementary:) And thank you; I've heard good things about #1-2, #3 came about right as my publisher folded, so it hasn't gotten any 'buzz'....hoping that #4 boosts it up.

@Alina: Sometimes I feel as if I definitely need to give up sleep....or need more hours in the day!

@Trevann: LOL....hobby is defined as 'something you do for pleasure'....and I can definitely 'escape' into my shows:) Thank you; it's always nice doing a signing when you actually have something NEW:)

@Heather: I was late to the party as far as OUAT was concerned, but thanks to NetFlix, I caught up last year:)